More than 140 children were ritually killed in a single event in Peru more than 500 years ago. What could possibly have been the reason?

Evidence for the largest single incident of mass child sacrifice in the Americas— and likely in world history—has been discovered on Peru’s northern coast, archaeologists tell National Geographic.

More than 140 children and 200 young llamas appear to have been ritually sacrificed in an event that took place some 550 years ago on a wind-swept bluff overlooking the Pacific Ocean, in the shadow of what was then the sprawling capital of the Chimú Empire. 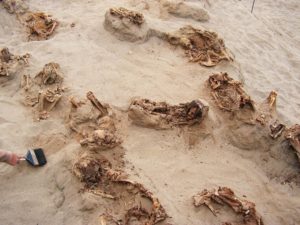 Scientific investigations by the international, interdisciplinary team, led by Gabriel Prieto of the Universidad Nacional de Trujillo and John Verano of Tulane University, are ongoing. The work is supported by grants from the National Geographic Society.

While incidents of human sacrifice among the Aztec, Maya, and Inca have been recorded in colonial-era Spanish chronicles and documented in modern scientific excavations, the discovery of a large-scale child sacrifice event in the little-known pre-Columbian Chimú civilization is unprecedented in the Americas—if not in the entire world.